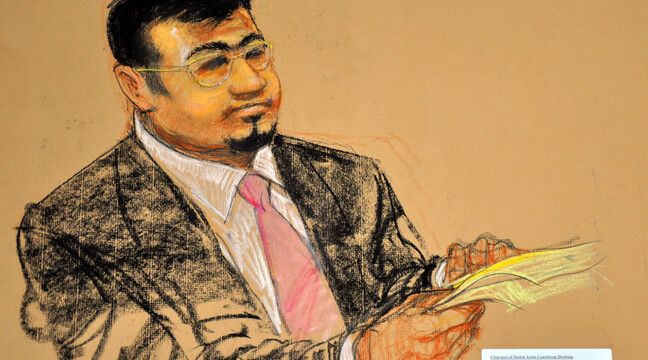 He lived in hell for three years. Guantanamo described the torture he endured for three years at the hands of the CIA in a military prison, where he was sentenced to 26 years in prison on Friday during a trial before a court-martial that would allow him to be released. Next year.

Majid Khan, 41, a former al-Qaeda ambassador, told military judges on Thursday that he had been assaulted, sexually abused and drowned after being captured in Pakistan in 2003. His testimony is confirmed by the CIA after the September 11, 2001 attacks, but he was the first prisoner to publicly describe his torture at the hands of US intelligence.

In a 39-page letter read to the inquiry, Majid Khan, who grew up in Pakistan, described being chained to windowless rooms for several days in a row before moving to the United States with his family. Secret CIA prisons in unidentified countries.

Thrown between several secret sites between 2003 and 2006, he described brutal investigations, drowning his face in icy water and keeping his head under water until he could speak. “They beat me until I begged them to stop. The worst thing was not knowing when the blows would come and where they would come from.

His interrogators attacked his family in the United States and threatened to rape his sister. His glasses are broken as he claims he is almost blind. “I had to wait three years to get a new couple.” Many nights of insomnia stunned him. “I had the illusion, I remember seeing a cow and a big lizard. I lost all contact with reality.”

“I lied to prevent violence”

Majid Khan, who was recruited by his family members from Al-Qaeda during a visit to Pakistan, confessed a few days after his capture in Karachi on March 5, 2003. He admitted to plotting to assassinate the Pakistani president and giving $ 50,000 to al-Qaeda members in Indonesia.

“Majid’s strong words (…) reveal the devastating atrocities committed by our own government in the name of our national security,” said Katya Justin, one of his lawyers. “The CIA plan failed and it was against our democratic principles and the rule of law,” he added.

Majid Khan arrived in Baltimore, 31 miles from Washington, at the age of 16, where he studied English at his father’s gas station before continuing his education at a local college.

He was given the right to speak publicly about the treatment he received when he pleaded guilty in 2012. He regretted his action. “I have been detained and kept in solitary confinement for almost 20 years and I paid a lot of money,” he said. “I reject al-Qaeda, I reject terrorism.”

But he assured the court that he did not blame those who tortured him. “I forgive myself and I will be at peace when others forgive me for the harm they have done to me,” he promised. “To those who tortured me: I forgive you. All”. A court-martial spokesman said the tribunal had sentenced him to 26 years in prison. But if he is contracted by a judge when he pleads guilty, he could be released next year.